What I got up to at this weekends Moving Targets hackday; we wrote a system that replays social media buzz as it happened on demand, so if your watching your favourite TV show later than everyone else you can still see everyone’s comments in context.

On Friday and Saturday, the Moving Targets event brought together developers and people from industry to work on the problem of audience engagement. This is the idea our team talked about with industry people on friday afternoon, the idea I pitched to the judging panel, one of two ideas they picked and the idea me and Amy Guy spent the night hacking up.

The ideal situation is to watch an event on TV (Film, Show, Sporting match) while taking in the social media commentary from others, so you get a full experience as part of a community of fans (some BBC shows broadcast Twitter details at the start to encourage this).

The problem is so many people watch after the initial broadcast, either from on-demand services like the BBC iPlayer or a recording device. When you do this, you miss out on the social media experience – and you have to be careful not to read any spoilers beforehand.

So why not have a service that re-plays social media messages as they happened, but at a later date? Any messages you add as you watch can be seen by others watching later on.

Here’s the end result; a web service that can import tweets for any event and make them available.

Ideally, you’d have better login mechanisms than this:

Then you can list the videos we have a conversation for.

You can open the video in a new window or “Stream” the messages – this shows you some controls to control the timeline, the messages and a box for you to post your own. 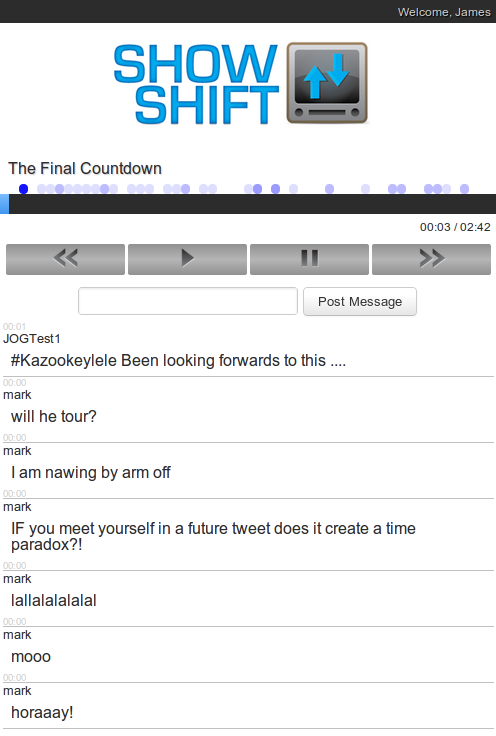 The blue marks above the progress bar indicate when messages appear; so if there was a rush of messages about the 14 minute mark (maybe that’s when the first goal was scored?) you can jump straight there.

One pain point is that you have to manually sync the message feed to what your watching; it would be better if we could use a microphone or camera to see the broadcast and do the synchronisation ourselves. Sadly, that was a bit beyond us in one night.

This page was designed with mobile devices in mind, and was tested all night in iPhone and Android. At one point, we even broke out Amy’s kindle for a laugh, and were amazed to see it working perfectly.

The watch option on the home screen appears only for YouTube videos and embeds the player right in the page. 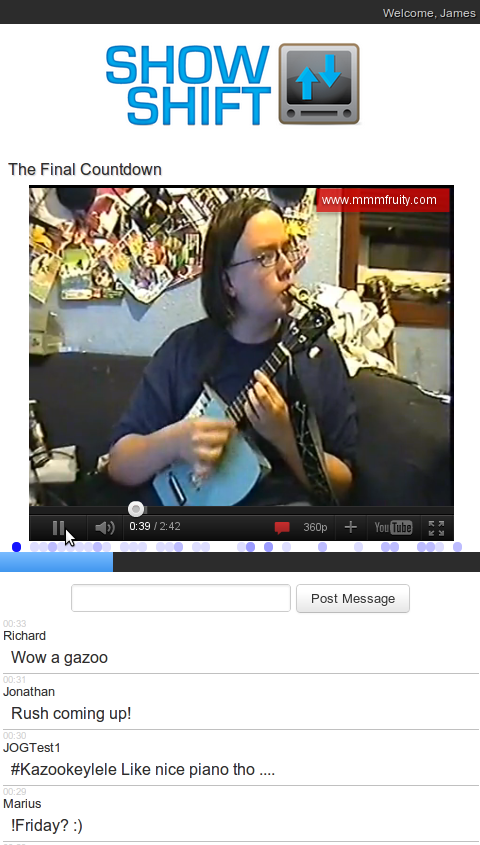 You can add any video you want.

We talked about options for

* filtering out the noise of the conversation by having some indicator of how long ago the message was posted or only showing messages from your friends.

* allowing spam messages to be reported to admins for review.

* adding notifications so if you replied to a message the original author could be notified and carry on the conversation.

* collecting some amazing data about which bits of a programme people paused at, fast-forwarded or re-watched.

All night, other coders kept remarking how similar the UI looked to SoundCloud – a service I have heard of but still haven’t seen.

Oh, and it was done in PHP & MySQL with thanks to jQuery, Smarty and Bytemarks Bigv.io – thought their beta programme, I was able to get a massively over-specced Debian+Apache+APC virtual machine for free that worked perfectly.

Special thanks to my team mate Amy, Jonathan Galea for making us some great graphics and Pockets for producing the video we used all night as a test piece.

What else is there?

We did a quick google search on Friday afternoon and found nothing. However, a more leisurely search just now found Tweet Rewinder – a service that replays your tweets for you. We did say at the hackday that it seemed like such a simple idea and we were surprised no-one had done it before, and it turned out they had – even if literally only by 1 month.

It was still a fun hackday, and hopefully demonstrates how even one day and nights work can produce an idea and a solid proof of concept you can show to people to develop the idea further. Thanks to all involved.

1 thought on “What I got up to at this weekends Moving Targets hackday; replay social media with ShowShift”