For Culture Hack Scotland this year I worked on an idea I came up with that week. I feel I didn’t really do the hack day properly; I ended up working on my own and not using any of the data. But the event was the perfect opportunity to test the idea.

Flocklight pulls all the twitter data for those attending or mentioning an event like a conference, and tries to highlight useful data about the connections between people. The aim is to provide you with information so you make the most of an event. For instance, are others you know going? Do you have something in common with a stranger there who you can go and chat to?

(The aim is not to produce some kind of score and crown someone the “winner”. I’m sure a gamification expert could do that and lots of people would love that – and indeed I was told about a recent conference with a score board for those that tweeted the most – but I personally think that’s meaningless, and I’m much more interested in exposing information to help you have a better time in real life.)

By 4pm on Sat (the deadline) we were tracking 148 users, 2272 follows between those users, 9354 tweets and 1417 instances of people mentioning another user in those tweets.

For each user, we had a page that exposed who they followed there and who they had conversations with. To be clear, we only tracked follows and conversations between two users we were already tracking; if a user followed someone who wasn’t there we didn’t care. 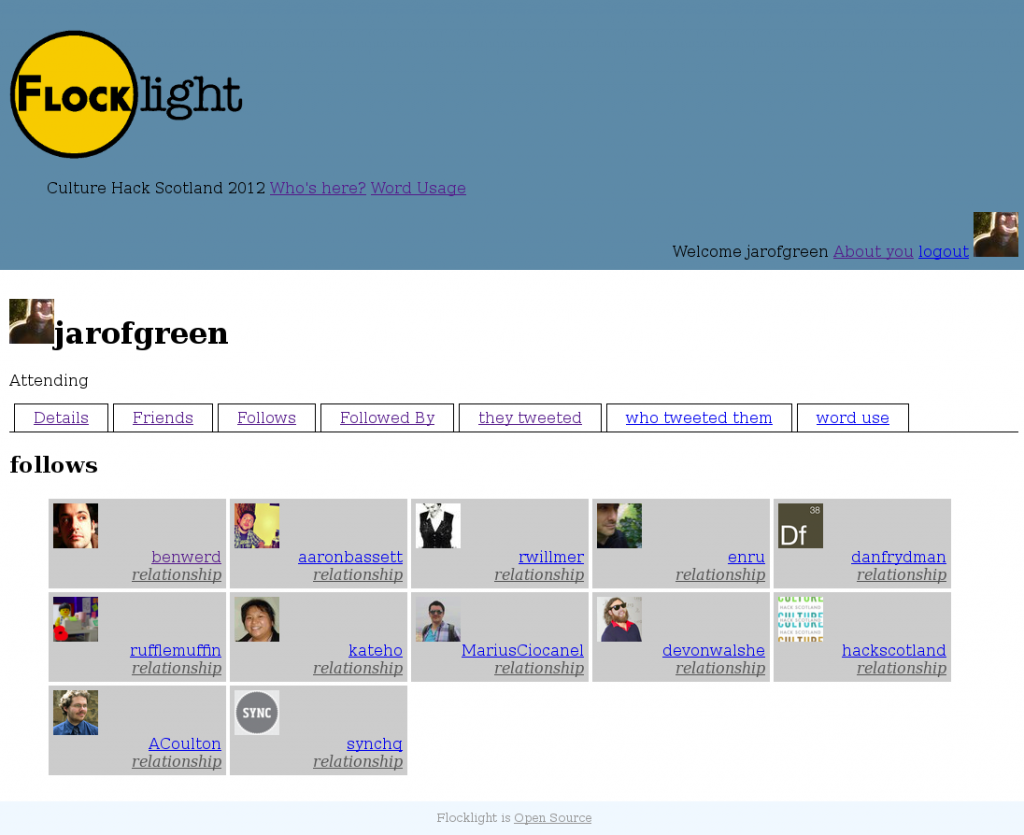 You could click on “relationship” to see the relationship between any two users: 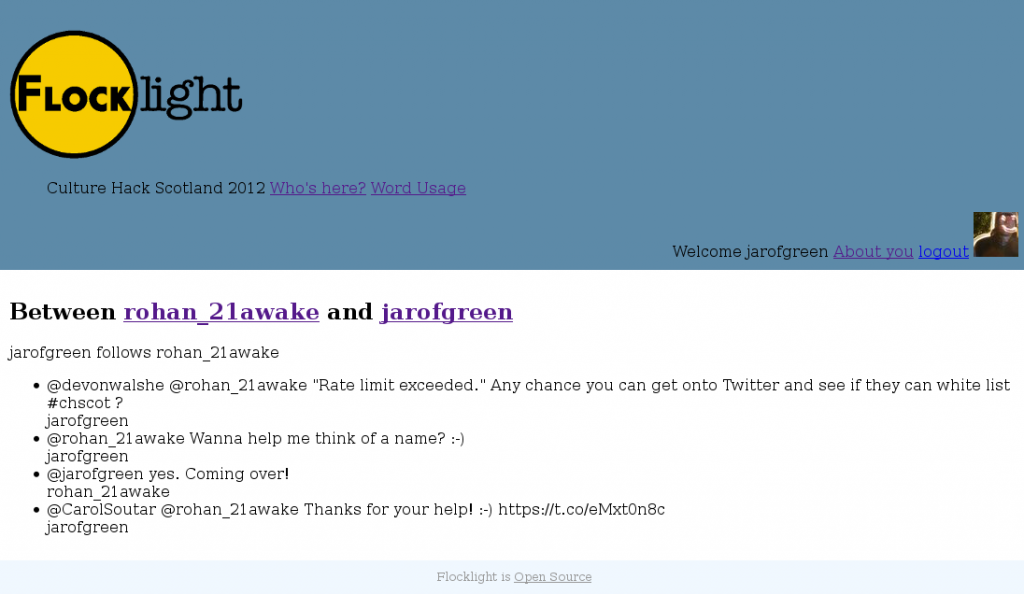 We also did some really basic word analysis so you can search for people who are talking about things you are interested in. At Culture Hack, sleep was mentioned a lot: 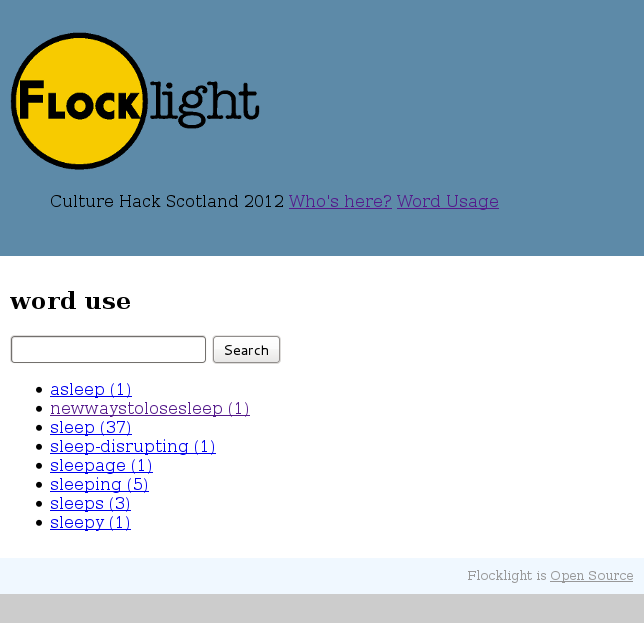 We pulled in data on everyone who tweeted with the hashtag and everyone on the curated list set up before the event. This means we had people who weren’t actually at the event but had tweeted because they were interested in it. I don’t think that’s a problem; there are still links there that may be interesting.

But I did add an “attending” flag on the system, so people could be marked as attending or not. At the hack day this was filled by marking those on the twitter list as attending and everyone else not attending.

So, what’s next for this? The main thing for the idea is to explore, probably by trial and error over more events, what information is signal and what is noise. What do people really want to know?

But here is other stuff you could add, apart from improving what’s already there and some good design:

Technically, here are the details: It’s done in PHP and MySQL and there isn’t much to say except Twitters Rate Limiting can be a giant problem. (I wasn’t the only one using Twitter and the venue’s IP was blocked almost as soon as the hack day started. Almost all my API developing had to be done on a remote server over SSH; great fun!)

At the moment it’s all done by pulling from the REST API and you have to do that a lot. You are constantly searching for new mentions of the hashtag. For ever user you care about, you are making two calls regularly; one for the tweets and one for the followers. It all adds up, and we haven’t started polling lists yet.

You are allowed many more calls as an authenticated user to a Twitter app and we started doing that. Apparently calls from authenticated users are measured per user; so if you can encourage users to log in you can make calls as them (however then you start seeing private data and you have to be careful).

Using realtime API’s may help a bit – and anyway a service that updates in realtime is much better than a slow one.

The end result? Several people really liked the idea and I know of one business that is going to be shown it in the coming weeks. The code I did is on GitHub, and I want to thank Rohan for coming up with the name and Carol for a rushed yet great job on the logo.

While there are lots of technical things that could be done, next is proving the central idea by asking is any of this data actually useful to attendees? I think lots of trials are needed to find out (and if anyone wants to invite me to a conference to try it out, get in touch!)

1 thought on “Flocklight: highlighting connections in a crowd”