I want a notes app on my mobile devices, and I want the content synced across all my devices and available at my desktop. Now there are tons of companies clamoring to offer such a service if I just open an account with them, but because I’m concerned about the security and safety of my data I’d ideally like one I can control and back up.

How can we do this? We could write an open source app that works with notes and talks to an open source server, but setting up a server is still a pain and a barrier for some people.

Here’s a simple suggestion: Let’s use git as the backend storage and transport mechanism. You write your note in a text editor, commit it and push and your done! 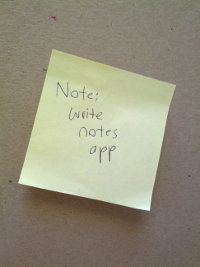 Setting up a server is now easy because there are tons of git providers out there. Bitbucket give you private repositories for free for instance.

And look at all the features you get out of the box!

The only flaw I can see is the requirement to store a copy of the repository on the device with full history, which could take up a lot of space. But we are talking simple text notes here, so hopefully not to much space would be used. And if you don’t care about history you can always regularly start a new repository and copy your notes across to reclaim some space.

Sure, this is a bit of a geeky solution and would probably never go mainstream – but sometimes there is nothing wrong in aiming for the geek audience.