Recently one project has been launched and another announced all from the same code base.

It all started with NESTA’s Make It Local competition. This required councils to open some new data and start a new digital service with it. The code should also be Open Source. Me and Edinburgh Council entered, and won the prize: a grant to fund development! Today the result Edinburgh Outdoors was launched (Article and video). 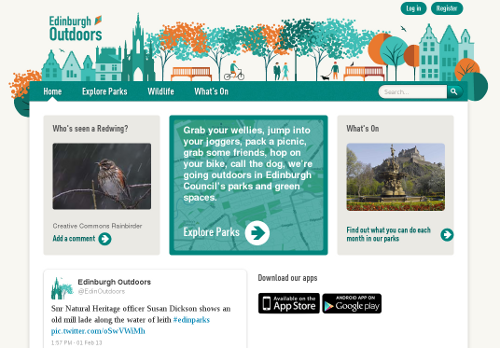 After that the Edinburgh International Science Festival got interested. With any public charity money is tight, and they couldn’t have afforded to develop from scratch. But by building on the Open Source code we managed to put a project together and yesterday the festival programme was announced with this: the City Sci-Quest! Some new features are being developed for this and they will be released Open Source to.

The Open Source software is released on Github (Wed and Android, iPhone/iOS coming soon) and at the moment it’s more of a code dump than a full project. Things like documentation are needed, and making the code more modular would be good.

So what does this all do anyway?

It lets you run a website and native apps that list points of interest on a map and in categories and lets people find them. Users and anonymous browsers can comment or upload photos (moderation is an option).

There is also a game element. Administrators can set questions that users have to answer, with points being awarded and a leader-board being shown. Different types of questions can be set:

For every question, an additional explanation can be shown to the user after they have got it correct. This allows the game to be an educational experience.

There is a web admin interface and a very basic CMS is included. One way of showing static content from this is by month; so you have one page with all the months in the submenu and a different static content page for each one.

The Website is PHP & MySQL.Â  A lot of data is versioned in the database, although there aren’t friendly user interfaces to view that history.

Others involved are Sally Kerr at Edinburgh Council, Matt Wright atÂ Edinburgh International Science Festival, Marius Ciocanel who is coding the iOS/iPhone version and Eskimo who did the Edinburgh Outdoors design.